Aaron performed alongside Colin Mochrie, Debra McGrath and The Watch, as part of  SING! The Toronto Vocal Arts Festival at the Jane Mallett Theatre, in 2016. In 2022, Jensen composed the score to the short film, Be Inspired, which featured Colin as the voice of the Rooster. The film has since been featured at film festivals across Canada and Europe. 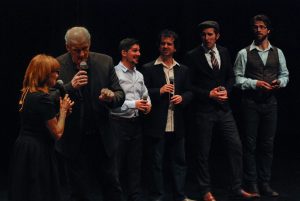