Aaron was delighted to provide music, lyric, orchestration, and dramaturgical support for the CTC New York Ensemble production of Henry Box Brown: A Musical Journey. The piece has recently been signed for a “Broadway Option” with four-time TONY award-winning producers. HBB has been in development since 2008, and was polished through community workshops, professional premieres and international tours before finally being snapped up for a Broadway debut. The musical has been the labour of love of writer/creator, Mehr Mansuri. Aaron is honoured to have contributed to the work. Wishing the cast all the best in the exciting months ahead! 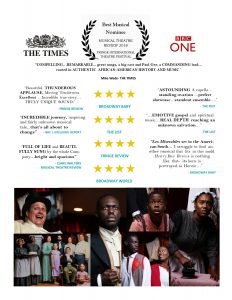